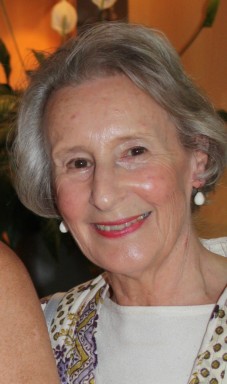 Geraldene Holt is an internationally acclaimed food writer and author of fourteen titles on the art of the kitchen and the garden with some of her books regarded as modern classics. Geraldene has written food columns for leading British newspapers including the Independent on Sunday and the Daily Telegraph, and the magazines BBC Good Food, Homes and Gardens, Waitrose Food Illustrated and Gardens Illustrated. And she broadcast regularly on local radio during the years she lived in Devon.

Geraldene is renowned for her practical and thoughtful approach to food informed by an historical perspective. Her books have been translated into 12 languages and her work has gained awards in Britain and France.

“I can think of only three English women who write even comparably well about a common subject, food. They are, of course, Elizabeth David, Jane Grigson and Geraldene Holt. All high priestesses of the modern English kitchen.”

After a successful career as a studio potter and teacher, Geraldene Holt began to write about food, by sheer chance, as result of a blizzard that destroyed hundreds of unfired pots in her Devon workshop . Taking refuge in her warm kitchen Geraldene began to bake cakes, tarts and biscuits and it soon dawned on her that by selling her home-made cakes on a West Country market stall she could rescue the family finances. Hearing of her successful cake stall – decades before they became a familiar sight – a publisher invited her to write a cookery book of her ‘market-tested’ recipes. Twelve months of seasonal baking later, she began to write about her experience and Geraldene Holt’s Cake Stall became a best-seller which encouraged publishers to invite her to write further titles and to embark upon a new career.

Geraldene Holt divides her time between the village of Saint Montan in the south of France and the city of Oxford in England.